Books about the Black Sash 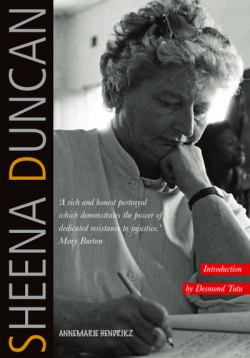 The biography, SHEENA DUNCAN, described by Mary Burton as ‘A rich and honest portrayal which demonstrates the power of dedicated resistance to injustice’, was first launched in Cape Town on the Black Sash’s 60th birthday celebrations on 19 May 2015.

Archbishop Emeritus Desmond Tutu was one of the many distinguished guests at 6 Spin Street and author Annemarie Hendrikz read his Introduction to SHEENA DUNCAN as part of the proceedings, following a moving tribute to Sheena from human rights activist colleague and friend, Aninka Claassens. 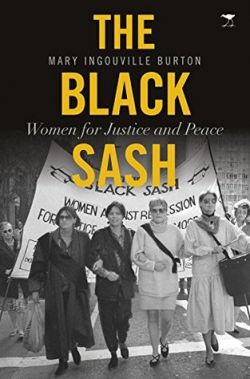 The Black Sash by Mary Burton

This is the story of a remarkable organisation of mostly white, middle-class women who became known for standing silently in public, singly or in line, wearing a black sash and carrying a trademark poster in protest against the injustices of apartheid.

Though they lost their first campaign – against the disenfranchisement of ‘coloured’ voters in the mid-1950s – they turned their attention to other unjust laws and over the decades carved out a unique role for themselves, bearing witness, developing expertise and expert knowledge, and generally moving way ahead of the rest of white society in campaigning , for instance, for a universal adult franchise, for an end to capital punishment and for legal abortion.

Though harassed by the government, the Black Sash was one of the few white organisations that won widespread credibility and respect, both locally and abroad, and by the 1980s had become a recognised part of the broad movement for change in the country.

Writing from prison in 1985 to congratulate the Sash on its 30th anniversary, Nelson Mandela said:

“In spite of the immense difficulties against which you hvae to operate, your voice us heard right across teh country. Even though frowned upon by some, it pricks the conscience of others and is warmly welcomed by all good men and women."

This uniquely South African story is written by Mary Burton, herself a national president of the Black Sash for several years and, later, one of the Truth and Reconciliation commissioners. With an insider’s perspective she helps us understand what drove this group of women, what it was like to be involved, and what lessons we can learn from the Sash’s history. 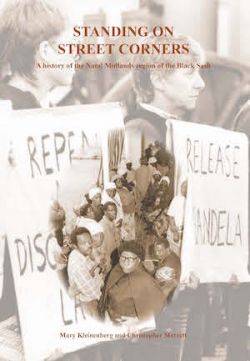 Standing on Street Corners by Mary Kleinenberg and Christopher Merrett

"This book looks specifically at the Natal Midlands (Pietermaritzburg) region and the distinctiveness of its contribution. Like other regions it supported the liberation struggle through public protest and educational campaigns aimed at exposing iniquitous apartheid legislation. In a police state this required considerable determination and courage. During the darkest hours Natal Midlands Sash kept alive hope for universal civil rights in a democratic South Africa.

Whether Sash was a political pressure group of women, or a women’s organisation challenging patriarchy it generated lively debate. Environmental issues were also accorded a high priority. Fifteen interviews show that involvement in Sash was a life-enhancing experience for many members who have looked back with pride and honour at their part in the anti-apartheid movement from 1955 to 1994."

The book is available in bookshops or is freely downloadable here (as 2 megabyte file):