Val Rose-Christie’s death on 14 July 2015, three days after her 87th birthday, brought to a close a life dedicated to care for others, and to the quest for justice for all.  She is described as feisty, brave, outspoken, and also as warm-hearted, friendly and fun.  In the Black Sash we knew her as an unstoppable monitor of abuses of people’s rights, as an activist determined to oppose forced removals, police raids, mass arrests and detention without trial. 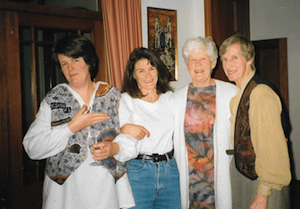 She was active in the then Progressive Party, and especially in UMAC, its Unrest Monitoring Action Committee, and this drew her into the Black Sash’s Monitoring Group.  After the banning of the Detainees Parents Support Committee, she was also a key member of the Human Rights Committee (not to be confused with the Human Rights Commission established by the government after 1994).

During the 1980s in particular she was known and trusted in the townships of Cape Town, and her friendships made during that time lasted till the end of her life. Fellow monitor Margie Probyn writes that there is a street in KTC named after Val - it comes up on google as V Chris Close. The KTC Masincedane Committee named it after her when the area was developed. She was always known as “Val Chris”.

Rosalind Bush remembers that Val and she worked closely together on the joint organisation initiative – the Network of Independent Monitors; the IEC monitoring portfolio and she was also a regular court monitor. “Such a spunky lady,” she says, “called a spade a spade, lovely sense of humour with a lovely deep chortle - another wonderful Sash woman who I feel privileged to have known and worked with.”

In the time of the National Peace Accord she was a valued member of the group of Peace Monitors, where her extensive knowledge was a great asset.  When it came to the elections in 1994, she was once again an important member of the election monitoring teams, and many of the international monitors drew on her experience and wisdom. I remember feeling proud and grateful that we had her and many others working hard to ensure that our elections in this province went smoothly and correctly.  I also remember a hair-raising small-aircraft flight to several areas outside Cape Town, including flying through a storm on the way home from George, which required all our calm and self-control.

We pay tribute to a woman of courage and energy, and are grateful to have had her in our midst.  We send our sympathy to her daughters and all her family.