Peggy was a longtime member of the Sash, joining in 1958 and active first in Port Elizabeth where she played a prominent role in the campaign to support political detainees, and latterly in Grahamstown where she and her General Practitioner husband had retired. For years she worked in the Grahamstown Advice Office, monitoring and cleaning and sorting files. Prior to the first Democratic Election she travelled miles as part of the team educating first time voters. She was recognised as a "veteran of the struggle" in 1994 and along with others she travelled to Johannesburg for a reception with Nelson Mandela. 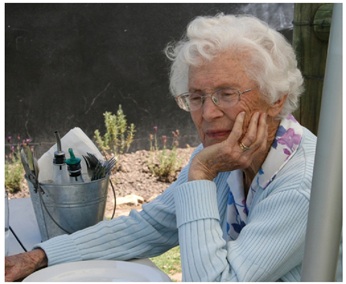 Peggy had many friends and she was a person for whom friends were essential. As one of her friends commented, "She taught us all how to live and latterly how to die." Peggy had a strong faith and was a lay preacher at the Grahamstown Cathedral. When her youngest son died of cancer in 2009, her faith shone through.

When she reached her 90s it was hard to realise that she had become old. She still had her patrician bearing, was well dressed with a lively and open mind and a great sense of humour. Never judgemental, she attracted many young friends.

A farmer's daughter from the Free State Peggy graduated from UCT in 1940 and married Jock McCoy in 1942.She was mother to 4 children. Her children described her as an avid reader, an excellent baker and a knitter of beautiful fair isles and a keen gardener.

But above all we remember her as a committed and serious activist.

Peggy McCoy (1920-2012) Peggy McCoy... taught me a great deal about how one should live: with an open and engaged mind; a commitment to her community and social justice; a finely tuned hand at baking; and a wicked sense of humour." These words, posted by her granddaughter Sarah Sladen on Facebook, must sum up for many the sense that the well-loved Grahamstown resident who died recently helped make of life - her own and other people's.

A farmer's daughter from the Eastern Free State, Peggy went to school in Bloemfontein and graduated from the University of Cape Town with a BA in 1940. Her feisty mother, Maude Gilbert, was in the first batch of women students to graduate from Rhodes University in 1918. Peggy had said her mother and one of her own university lecturers, Professor Jack Simons, strongly influenced her thinking. Beautiful and vivacious as a young woman who loved parties and dancing, Peggy married general practitioner Jock McCoy in October 1942 and they lived in Port Elizabeth, his home town. A mother to four - Penny (Silva), Maureen (Sladen), Michael and Andrew - her children describe her as "a gardener, an avid reader, a maker of cakes and puddings and a knitter of beautiful fair-isles.

"But she was also a serious and committed activist during a time when this was seen as odd and dangerous," says eldest daughter Penny in her funeral tribute. Peggy was recognised after 1994 as a "Veteran of the Struggle" and along with others, travelled to Johannesburg for a reception with Nelson Mandela.

Peggy joined the Black Sash in 1958. "Her commitment to justice and to nonracialism, her courage and anger, made a huge impact on me," Penny writes. Peggy's activism ranged from running a co-operative from the family's garage to taking supplies to political detainees during the State of Emergency. "Mom and friends would go down to the East End Prison in PE in her VW combi (another very cool thing about Mom - people stared at us in that bus!) loaded with coats, blankets, socks and food. "The most sobering thing was the supply of baby clothes. We didn't think that much about the families of the political prisoners, but they were as much victims as those behind bars," writes Maureen. "Mom spoke beautiful, unaccented Afrikaans (I remember a taxi driver complimenting her on it in Bloem), so she was the one who spoke to the guards and policemen. I remember my fear - but her ladylike determination.

"Mom wasn't paid, but she most certainly worked. One of my earliest memories was finding a stack of small white and black flyers that read APARTHEID, NO! I think she had been putting them in mailboxes and I remember Dad saying in a very anxious way, 'Pegs, get rid of those!" Penny says, "She expected at times to be arrested and told us who to contact if this happened." On the other hand it was also through their mother that the four McCoy children learnt to appreciate theatre, classical music and cricket.

When Peggy and Jock retired to Grahamstown in 1976, Peggy joined the Cathedral parish, becoming a lay preacher in 1987. She volunteered for work with Gadra Advice and Community Work. Even in her later years she continued to volunteer once a week for the Grahamstown Advice Office, and well into her 80s she went with Michael Whisson to Fort England to lead communion services. Andrew Robert McCoy, Peggy and Jock's fourth child, died of cancer in August 2009. Peggy spent her last years at Somerset Place retirement complex and her last months at St Luke's Frail Care. "She was a person for whom friends were essential, and she was loved by many," Penny writes. "She was a complex person, energetic and frank and intelligent." And Maureen: "Mom was a force, but a quiet one, with very good legs."

Peggy died peacefully in Grahamstown on Saturday 28 July, aged 92. Information for this piece was compiled from tributes by her children for her funeral at the Cathedral of St Michael and St George on Thursday 2 August, as well as a piece by Adrienne Whisson titled "Super volunteer - Peggy McCoy".